The British Freedom Party has just been forced to abandon its attempt to hold a party meeting after the venue’s owner cancelled, apparently after being intimidated by threats from the party’s opponents.

Paul Weston, the Chairman of the British Freedom Party, wrote the following response. 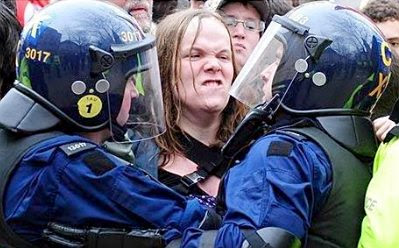 Unite Against Freedom!
By Paul Weston

The UAF — “Unite Against Freedom” — has temporarily got its totalitarian way and closed down British Freedom’s London meeting, through the use of violence and intimidation. George Whale received a phone call from the venue’s landlord earlier today. The man sounded very frightened and refused to say why the event was now off.

Such is the undemocratic way of the Communist Left. There are three points to be recognised here.


Nothing shows better the extreme hatred the Left has for Western Civilisation than their unashamed alliance with a movement (Islam) which is mortally opposed to liberalism’s sacred calves — women’s rights, gay rights, abortion and multiple cultures. Yet Islam and the Left are in harmony on the major issues. They are anti-Christian and anti-Jew; they are anti-democracy and anti-individual rights; they are anti-capitalist, and they regard the individual as existing merely to serve the collective. Consequently, they have the same common enemy — Western Civilisation.

Unite Against Freedom has been in the news this week. Not for any acts of human kindness of course, but for electing a terrorist sympathiser, one Azad Ali, to Vice Chair of UAF. Andrew Gilligan reports on this in The Daily Telegraph, and states:

Azad is the community affairs co-ordinator of the extremist Islamic Forum of Europe, which controls the East London Mosque and which is dedicated, in its own words, to changing the “very infrastructure of society, its institutions, its culture, its political order and its creed … from ignorance to Islam.” Through “hisbah” (the enforcement of Islamic law) and “jihad,” it aims to create a “global” Islamic dictatorship, the caliphate, and its “primary work” in this “is in Europe, because it is this continent, despite all the furore about its achievements, which has a moral and spiritual vacuum.”

In addition, Azad Ali of Unite Against Freedom has been exposed at the blog site Harry’s place:


So this is the UAF: historically the ideological allies of the Nazis, genocidal murderers of their own people, and now promoters of Islamic terrorism. It is hard to believe in a non-surreal world that these truly obscene and damaged people have the gall, the sheer hypocritical effrontery, to maintain that WE are the fascists. Verily, they need mental counselling.

The typical Unite Against Freedom activist probably suffers from some childhood trauma or other, so perhaps we should excuse them, or at least sympathise with them. But what is inexcusable is the support these Nazi thugs received from Ken Livingstone and a number of Members of Parliament — who must be held to account for publicly endorsing such a fascist, hateful and rabidly anti-British, racist organisation.

The list of MP’s is here, and I will soon be providing a form letter to send to them, should they happen to represent your constituency. British Freedom will of course be writing to David Cameron — who has also endorsed the UAF — about this disgusting matter: